A little bit of background story:

Mid-Century style was born (and the exact time line is still being disagreed upon) in the mid-1930s and lasted until around mid-1960s in the United States. It started as a lovechild of the Modernist movements at the end of the World War II.

After the war ended, the demand for the modern furniture emerged due to the expansion of the U.S. cities and suburbs. The era is known for the peak of the technological advancement, timeless furniture designs and architectural landmarks, as well as the development of the new materials such as metal, glass, vinyl, and plywood.

Some of the Mid Century Modern designers are still idolised and their iconic pieces can still be found in the stores today, so for some inspiration you can always look into: Charles and Ray Eames, Florence Knoll, Arne Jacobsen, Eero Saarinen, George Nelson and Edward Wormley.

The Eameses are probably the most known name of the Mid-Century Modern Era in the product design circles for championing new technologies in furniture production, such as working on innovative moulded plywood and plastic resin products. In 1942 they designed a lightweight, stackable moulded plywood leg splint for the US Navy and later in the war they went on to make plywood parts for aircraft. Plywood is made by gluing together thin sheets of wood called veneers, with the grain of each sheet running in an alternate direction. This creates a material that is stronger and more flexible than solid wood.

The Eames's design for the DCM (dining chair metal) with its three-dimensionally moulded seat was greatly influenced by their wartime work. It was one of the most influential chairs of the second half of the 20th century and was imitated and adapted by designers around the world.

Florence Knoll Bassett  has been a leading woman in the furniture industry for decades. Her classic designs from the mid-century period are easily recognised by the interior aficionados.

How to Spot Mid-Century Modern Style?

Mid-century modern style gave us clean lines, organic curves and introduced us to the new materials, shapes and colours. It is well known for:

The demand for the Mid-Century Modern furniture is still high, which makes it easier when furniture shopping for your modern home. But the price tag for the original designs stays quite high as well. What helps, is that there are a lot of vintage furniture pieces sold for more affordable prices and the bonus is that it brings a bit of authenticity to the interior. However, if you are not a fan of pre-loved furniture, opting for one large piece of furniture would set the tone for the room, and the rest can be built around it.

Stay within the colour range of your choice and be cautious when choosing the wooden finishes, avoid clashing too many different shades of wood.

Opting for the coarse linen upholstered sofas and armchairs will bring some texture to the room and give it a relaxed feel, while also brightening up the room if you decide to stick with brighter colour palette for the sake of Mid-Century Modern style.

A hallmark if the Mid-Century furniture would probably be "the Sculptural chair", which sets the tone for the whole interior. It will enliven an empty corner and definitely bring some geometry to the decor.

Here at Pepper Sq. we are carrying a wide range of Scandinavian furniture, that is renowned for the high quality and seeking inspiration from the 1950s and '60s when designing their clean lined wooden furniture. You can also find plenty more other European designs inspired by Mid-Century Modern era, to add some style and functionality to your interiors.

The colour story for Autumn/Winter 2019/2020 suggests rich tones, each capable of making a statement, but also with a versatility that creates warmth and harmony when paired together.A sophisticated, yet 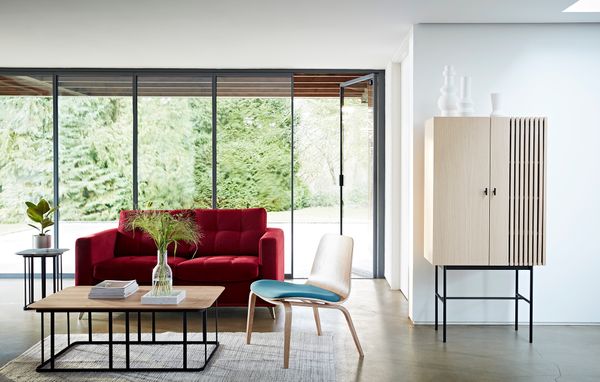 Living room is a focal point of the home, the room that sets the tone for the rest of your home's decor. There is nothing like crafting a well-designed lounge area to suit